I have been waiting for such a long, long time for Marina’s new album to be released in the US!  Her first single “Primadonna” picked up fame a little ways back and has been the teaser to the alternative pop album that is finally here.

It all started across the pond (where Miss Marina is from). The album was first released and her vocals could finally be heard across the radio waves.  Trending topics arose and articles about the songstress and her band started popping up everywhere.  But now, with American listeners patiently waiting – we have been satisfied  and given the synthesized and bubblegum/sex-kitten vibe that this alternative act gives off all by herself (well…with the help of her Diamonds of course.)

The record is a definite mix of fast paced dance and slowly built messages.  First off there is the killer single “Primadonna” that was released right off the bat as a hit.  It is of a simple, hard-hitting beat with a feminine pop that completely accentuates her sound.  Next we have “Lies” which is full of soulful lyrics but still keeps you on your toes with the punched sound.  Then, 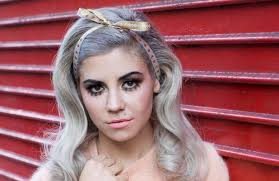 “Homewrecker” features that classic alternative take on a “done-before-song”.  Fully incorporated are the vocal changes that keep things interesting while you keep dancing.  “Starring Role” has truth behind the well sung and easily lovable track; It’s a great sound with the heavy 808s and guitar riffs.  Following is the song “Power & Control” – which is absolutely my favorite.  With its enriched sound and creative tone and vocals, it creates a dance-y rebellion. The last two songs that fulfill the hypnotic sound are “How to Be a Heartbreaker”, which is already making BIG waves in the UK and US, and “Radioactive”.  While the first is a quick fitted and hard hitting sound about the steps to becoming a “heartbreaker”, the latter is a simple song about the feelings of feverish love; nothing new but still quite entertaining.

Aside from the pulsing beats, you have the slowly built ballads that complete the album.  Among them is the first: “The State of Dreaming”.  The song fools you with its downtempo start but surely creates the environment for a quick hit with the perfect mixed message. The next is “Teen Idle” which is about misuse and of ‘young forever’ gone wrong.  Where the relatable lyrics end the lively beat begins.  “Hypocrates” is the talk of being who you are and people not allowing you to voice your opinion, a major point to fit a major tune.  The final installment is “Fear and Loathing”, which is about misjudgment and caution.  The beginning amounts to a final and lovely synthesized fantasy.  The deluxe album includes remixes and two videos so you continue living it up Electra Heart style.

The only tracks I excluded were “Bubblegum B*tch” and “Sex Yeah”.  I personally feel like they are essential to the overall personality of the album but also think the record could totally survive if they had been left on the cutting-room floor.  Overall and totally throughout, I LOVE this album to death and sincerely recommend listening to each song individually because each one has its own personality that shows another side of Marina; it really represents how much of an artist she is.  I recommend this album to anyone who listens to: Little Boots, Santigold, and Florrie.

One thought on “Marina & the Diamonds: Album Electra Heart”

I love to write about my surroundings whether it be the newest fashion trend or the song stuck in my head. I'm constantly reading for inspirational material. This blog is meant to express my views on style and trends but also just whatever I feel has a story. Check out my page to see the world through my eyes!
%d bloggers like this: