Adapted from the 2010 play Posh, The Riot Club takes spoiled rotten to a whole new level.  The 2014 British drama/thriller is centered on the controversial and downright devious actions of a group of ultra privileged male Oxford student who are descendents of prodigal figures in British society with reputations that pave future careers.

Aside from the exhilarating plot and the great new spin on a done-before idea, what should really grab your attention is the immense amount of posh, Brit boy beauty.  This club of mesmerizing misbehaving men includes the likes of Sam Claflin, best known for his roles in the Hunger Games films, the most recent Pirates of the Caribbean film (2011), and the upcoming feature film Love, Rosie, Max Irons, son of the critically acclaimed actor Jeremy Irons and known for his roles in The Host (2013) and The White Queen (2013), and Douglas Booth, recently featured as 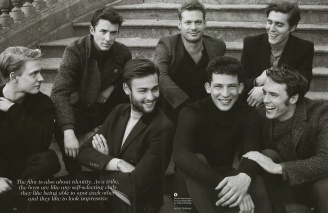 Romeo in the newest Romeo & Juliet (2013) remake with Hailee Steinfeld and Pip in the British TV mini series reboot of Great Expectations (2011).

The additional members of the club may not have garnered as much star power yet as the aforementioned leading lotharios, but they certainly deserve the same amount of #mancrush recognition.  Among these members include Sam Reid, who has been featured in the 2011 film Anonymous and the recent Jennifer Lawrence film Serena (2014) , Matthew Beard, known best for his roles in One Day (2011) and The Imitation Game (2014), and Freddie Fox, featured in The Three Musketeers (2011).

Make sure to keep an eye out for these swoon worthy studs in The Riot Club if and when it comes out in the states.  To tide you over until then, here is the gripping trailer:

2 thoughts on “#mancrushmonday: The Dreamy Male Cast of The Nightmarish Riot Club”

I love to write about my surroundings whether it be the newest fashion trend or the song stuck in my head. I'm constantly reading for inspirational material. This blog is meant to express my views on style and trends but also just whatever I feel has a story. Check out my page to see the world through my eyes!
%d bloggers like this: